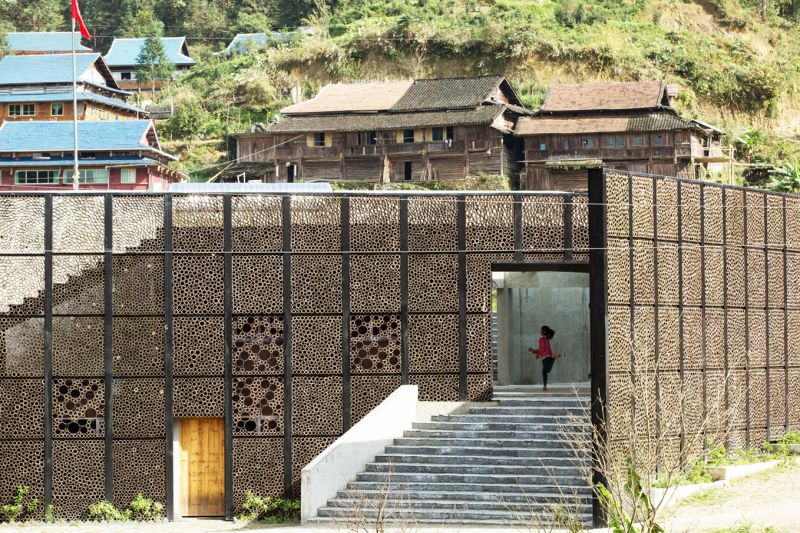 In this article, Elisabeth Lee of Project Mingde (The University of Hong Kong) talks about their 2018 double award-winner, Dabao Primary School and Community Cultural Centre. Winning in both Architectural Design / Other Architecture and Architectural Design / Educational Buildings, this project is a brilliant and powerful example of how architecture can draw people together, the architects working with the local people throughout the design process.

The Dabao Primary School and Community Cultural Centre is remotely situated in the Dabao village, which is an isolated settlement within the scenic mountain range of Guangxi province in China. It provides a home to around 100 families of an ethnic minority group called the ‘Yaos’, who have their own very distinctive dialect and culture. This non-profit project is funded by PAN Foundation and sponsored by Lee Hysan.

Project Mingde is a platform through which faculties and students of the University of Hong Kong, industry professionals, and donors collaborate on non-profit projects that address social gaps in rural settings.

The Yao tradition places great importance on their children’s education, but due to the village’s seclusion and poverty, it lacked a safe environment for the children to learn. The two simple wooden structures that served as the school to over 70 children were over 60 years old and close to collapse. Project Mingde stepped in to rebuild the school which also serves as a community cultural centre. The Dabao Project provides the much-needed teaching and community facilities to villagers that previously did not exist. Children now have an inspirational space in which they can learn and play and the community has a comfortable area to gather and connect for events, festivals and celebrations, keeping alive the heritage and the spirit of the Yao culture.

A reciprocal exchange in culture, knowledge and skills was key. Local villagers were as much involved in the project as the students and professionals. The entire design process was an active dialogue between local villagers and non-local volunteers. Therefore, the process was not only about transforming theory into practice, but also cultural differences into mutual understanding and respect. The primary school is situated within the paddy fields on the mountains of Dabao. Tackling the topographical constraints of the site, the spaces are arranged in a sequence of longitudinal layers placed at different levels. These spaces translate from open to enclosed and communal to private areas. The road facing planes are composed of a bamboo facade making use of the abundant supply of bamboo in the area and maximising the use of local resources. It not only acts as a protective barrier from the road outside but also regulates the transmission of noise and daylight whilst ensuring the privacy of occupants at the same time. The use of different diameters and lengths of bamboo tubes responds adequately to the different light requirements of the rooms for their respective functions.

The village is situated in a mountain valley which attracts frequent and unpredictable heavy rainfalls. This oftentimes hindered the already very challenging access into the village by turning the constantly fog covered narrow and unpaved roads into slippery and inaccessible paths. Not only did this impose difficulty in accessing the site from the outside, but also in the planning and progress of the construction on site itself. These unexpected circumstances posed unforeseeable complications from one day to another and the unstable set of parameters caused construction changes and delays throughout the process. It was the selfless devotion of all parties involved that has made this project possible. We were all thankful to see the sunshine after the rainstorms, completing this project with irreplaceable experiences.

Due to the nature of the project, the outcome was not merely the completed architectural space dedicated to the local community, but the gain of knowledge and skills, creativity in use of local resources, an understanding of different traditions and lifestyles, and an appreciation of living in harmony with the nature from both sides — the locals and the non-locals. It is the art of merging architecture with culture and nature harmoniously.

What led to me becoming an architect is my profound love and deep respect towards nature and curiosity in the potential of materials by turning these into spaces that fuse harmoniously into the natural environment we live in.

I believe that architecture not only aims at the betterment of the built environment through the art and science of designing and creating but, at the same time, it is also a design engagement capable of balancing social inequalities. Architecture has the potential to improve the existing state of the built environment into a more favourable one for the welfare of the population while promoting ethical and social balance.

I am, by no doubt, feeling tremendously honoured to receive the Architecture MasterPrize. As much as I feel honoured, I also feel grateful of the Architecture MaserPrize to be aware of its power and influence it can have in directing the future of the built environment onto the right track, a future that encourages social balance. An architect’s plan cannot be realised without the help of a collective taskforce. I am very thankful of them and at the same time would like to sincerely thank the Architecture Masterprize on behalf of the entire team, whose dedication and self-sacrifice are beyond words to describe.

A huge thank you to Elisabeth Lee for sharing with us such fascinating and uplifting information about Dabao — the project itself and also the place and the people. The philosophy behind this project and this article is one full of hope and the possibilities that lie within architectural design. Thank you!