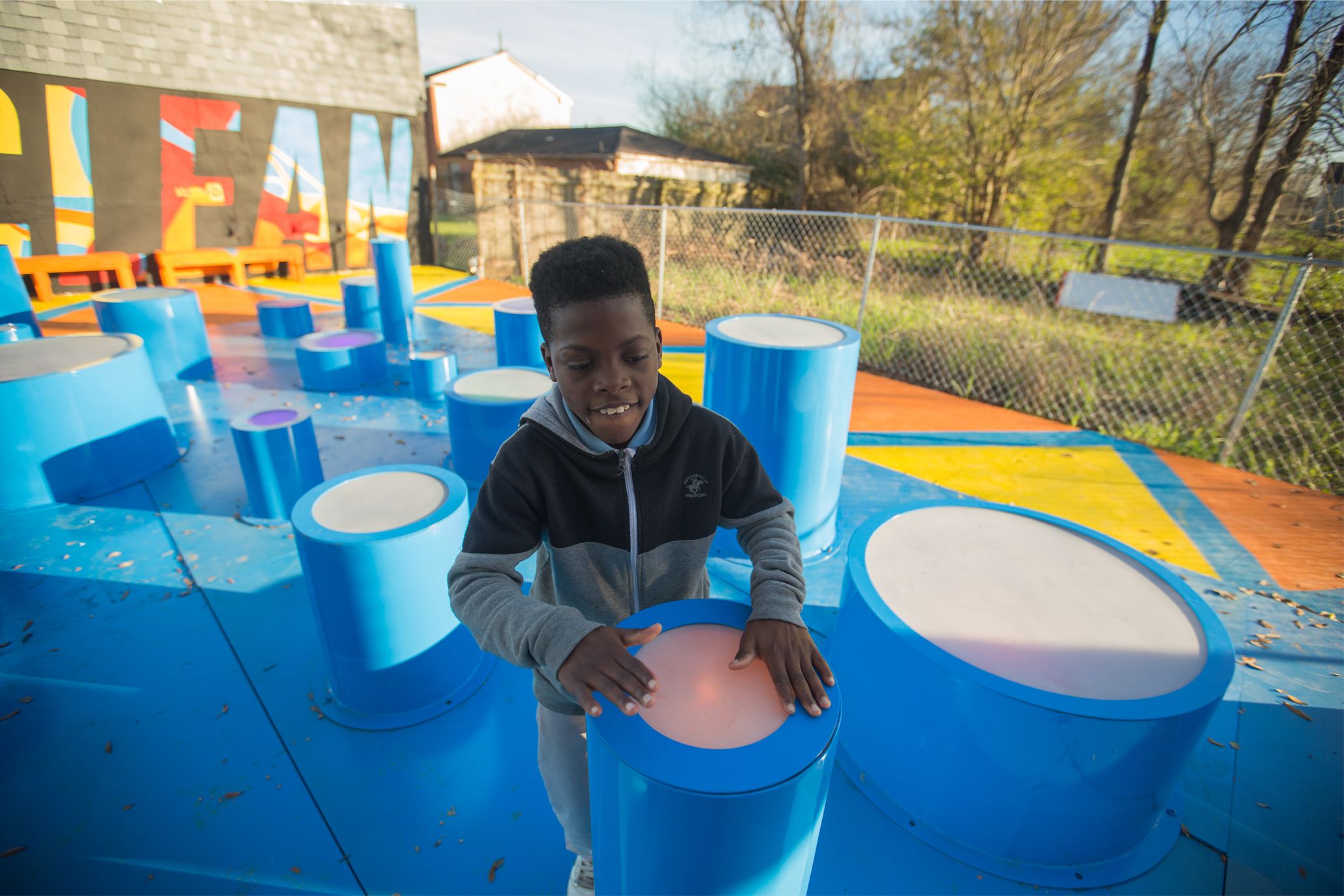 The Hangout by The Urban Conga

Here, we look at The Hangout, a 2018 MasterPrize winner in the Landscape Architecture / Installations & Structures Architecture category, designed by The Urban Conga and full of creativity and joy.

The Urban Conga is a multidisciplinary design firm that promotes community activity and social interaction through play. They achieve this through creating interactive installations and environments that spark creativity, exploration, and free-choice learning into a space. All of our work is based around the quote by Plato “You can discover more about a person in an hour of play than a year of conversation.”

The Hangout was created to activate an underutilized space through play. It was designed to promote the idea for play to exist in everyday spaces, and encourage people to think about these spaces that could become PLAYces: like a crosswalk, laundromat, building facade, sidewalk, bus stop, or just the everyday space in-between. These often once boring or underutilized situations can turn into stimulating, creative outlets for social interaction and community activity through the idea of play.

We received a grant from KaBOOM! to create a space that promoted the idea of play in everyday spaces. We began engaging with local community stakeholders in the Lower Ninth Ward and they all directed us to a man by the name of Burnell Cotlon. Burnell was a community leader that opened the neighborhoods first and only grocery store, laundromat, and barbershop post-Katrina. We worked with Burnell to create a space that could be functional but engaging. We also wanted it to contain lighting because there were no street lights on this block, and the local school kids waiting in the dark for their bus. So we created a series of cylinders in different heights and clusters that allowed people to sit, climb, or work at. The cylinders were also touch sensors so each plays a different sound or beat when touched. At night each cylinder lights up and changes when touched.

This project uses new touch sensor technology to create an interactive experience within the space.

As we all know the Lower Ninth Ward in New Orleans, LA was hit hard by Hurricane Katrina 13 years ago. But, this neighborhood was still struggling to get back on its feet even after that many years. It was not until when we started marketing and creating this project that the streets and street lights in this area were redone. So the outcome we were most proud of was not only providing the community with a space that they could call their own, but bringing attention back to a forgotten community that was in need.

I was told to go to architecture school because I enjoyed to draw and liked math. I soon learned that architecture school was much more than this and became extremely interested in how people used spaces and what happened in those moments in between the buildings. During my thesis I became interested in how to activate underutilized spaces. Me and several of my colleagues began creating small scaled interventions. There was a key moment when we just took out a giant 12 foot beach ball to a space. This middle-class family began to play with the beach ball. As they were playing this homeless man walked up and the ball rolled to his feet. He pushed it back over. The kids pushed it back and at that moment I began to see these barriers break down and they all began to play in this once empty overgrown lot. A few days after that moment I quit my job and decided to start a design firm focused on implementing playable design for all into spaces.

I believe technology is what helps the work I am doing grow and have the capabilities to be implemented more within our urban infrastructure.

I also believe that design — in all aspects — is something that heavily influences our lives. We spend all of our lives engaging in designed elements or spaces. If these spaces that we travel to, from and through are boring and underutilized then that will truly effect our lives. So why not take those opportunities to turn these spaces into stimulating creative outlets that bring people together.

The Urban Conga and I are extremely honored to have received this award. We are excited that this honor can begin to show others that play can be designed within our cities and buildings, but not just for kids and in a way that is secondary. That play should be an important asset in designing a space that you want to be activated by people.

Many thanks to Ryan Swanson for answering our questions so wonderfully, and for reminding us that play is such an important part of life and design.